Back in early 2012 we were asked to take part in a feasibility study to determine if Earth Observation (EO) and open source GIS could benefit forest certification (namely the Forest Stewardship Council, FSC). That 14 month feasibility study has now drawn to a close and what follows is a very brief summary of its outcomes.

The Need for Independent Data

The feasibility study was carried out as part of the European Space Agency's ARTES 20 Integrated Applications Promotion (IAP) programme and followed the structure provided by ESA. One of the consortium's first tasks was to determine the needs of the users involved in certification.

As a non-forester I was fascinated to learn that much of the information gathered by certifiers to support their audits is provided by the Forest Organisations themselves (the ones being audited) or by other stakeholders with interests in the certification. This clearly highlights the need for more independent information.

Another major issue the certifiers face is the sheer size of the areas being audited, some being larger than 2 million hectares, making it impossible to physically inspect the whole area. EO clearly has the potential to give certifiers a 'bird's eye view' of the area in question.

EO can provide certifiers with a source of independent land classification data covering the entire certified area. However EO is not without its issues. To be used effectively, datasets must be available that relate to both the start and the end dates of the audit period to allow certifiers to see how land use has changed.

Much of the certified area sits at high latitudes (where the sun casts long shadows and for some of the year is in complete darkness) or in the tropics (where there are large levels of cloud cover). Synthetic Aperture Radar (SAR) is therefore required to acquire timely datasets anywhere around the globe - a field in which consortium members sarmap SA specialise. SAR-based sensors can penetrate cloud cover and do not rely on sunlight to illuminate the observed area.

Lutra's main task was to come up with a software solution to allow certifiers to make efficient use of the EO datasets described above. A high-level overview of the proposed system is shown below. 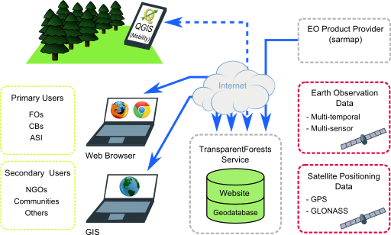 TransparentForests will primarily be a web-based service but will also provide interfaces for users to upload / download data from desktop GIS systems such as QGIS. TransparentForests will include an Android App for tablet devices based on QGIS which will allow users to view EO datasets in the field and to create / update their certification notes.

One of the most notable features of TransparentForests is its ability to generate visualisations of the differences in land use across an area, quickly drawing the user's attention to areas where natural forest has been transformed to another land uses.

TransparentForests has been designed to promote engagement from a range of stakeholders including NGOs, representatives of indigenous peoples' groups and the general public. It aims to help make certification more transparent (hence the name).

One of the critical elements of the design process was designing the system in a way that promotes transparency while at the same time reassures user groups uploading sensitive information (such as areas of high conservation value forest) that their data will be carefully guarded. 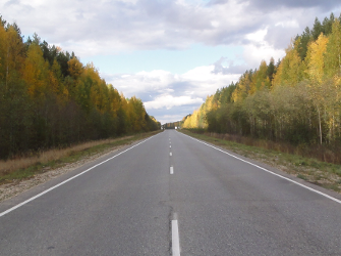 The feasibility study demonstrated that TransparentForests is technically feasible. It also estimated the costs of developing and running the service. The next phase in this ongoing project will be an IAP Demonstration Project where TransparentForests will be fully developed and field tested in a handful of pilot sites around the world.

The consortium is made up of 5 specialist service providers.

For more information about the project please see: